I’ve played games of all types pretty religously for 12+ years now, and I like to think I’ve played enough games from different styles over the years to know a […]

I’ve played games of all types pretty religously for 12+ years now, and I like to think I’ve played enough games from different styles over the years to know a thing or two about the industry, and what I hope to see in the future of the gaming world. It’s no surprise that VR (Virtual Reality) is largely the most anticipated step for the next generation of gaming, and many companies and upstarts know this and are attempting to take advantage of the build up to push their game along even more so to the masses.

I want to talk about an upcoming game called Dual Universe, but before I get in to that, I must first discuss a game that did (for the most part) exactly what the company behind Dual Universe is attempting to accomplish.

StarQuest Online – an MMORPG – and boy, let me tell you about that game. It was developed by a small company by the name of Castlethorn Software, and was quite honestly one of the worst, but best games I ever had the pleasure of playing in my lifetime. It also holds one of the worst ranked games in my book to have the least desirable graphics.

No really, check it out.

The one thing that made StarQuest Online stand out was its deep political system between its factions, which were all player controlled, and its multi-crewed starships. Yes, ladies and gentlemen, multi-crew starships in an MMORPG is not some new, radical design being developed Star Citizen, it was in this game, and it was done rather flawlessly.

The picture above shows every console that players would interact with, and act as one functioning unit to get their starship to travel the cosmos and blow shit up. It was a surreal experience, and because of these unique gameplay features, it allowed me to look past the worst parts of the game (IE: Graphics, UI, etc.)

So what all does this have to do with Dual Universe? Well, hold your shit, it’s about to get real as I explain it to you.

Dual Universe is developed by an upstart gaming company by the name of Novaquark. I don’t have much details on the company itself, only that it has ties to a robotics company, and is french based. How the two work together is beyond me, but what they have released so far is quite incredible, granted majority of it is only concept art and developer blogs.

Ok, so the general backstory so far is that a neutron star is barreling towards Earth, and in the next few hundred years it will collide with the solar system and obliterate everything.The human race has basically thrown its hands up in the air and said screw this, I am GTFOing out of this bitch. Plans start going up on the drawing board to construct massive colony ships known as Arkships, to take the most capable and brightest of human society away from Earth to start life on a completely new world, and to prosper. 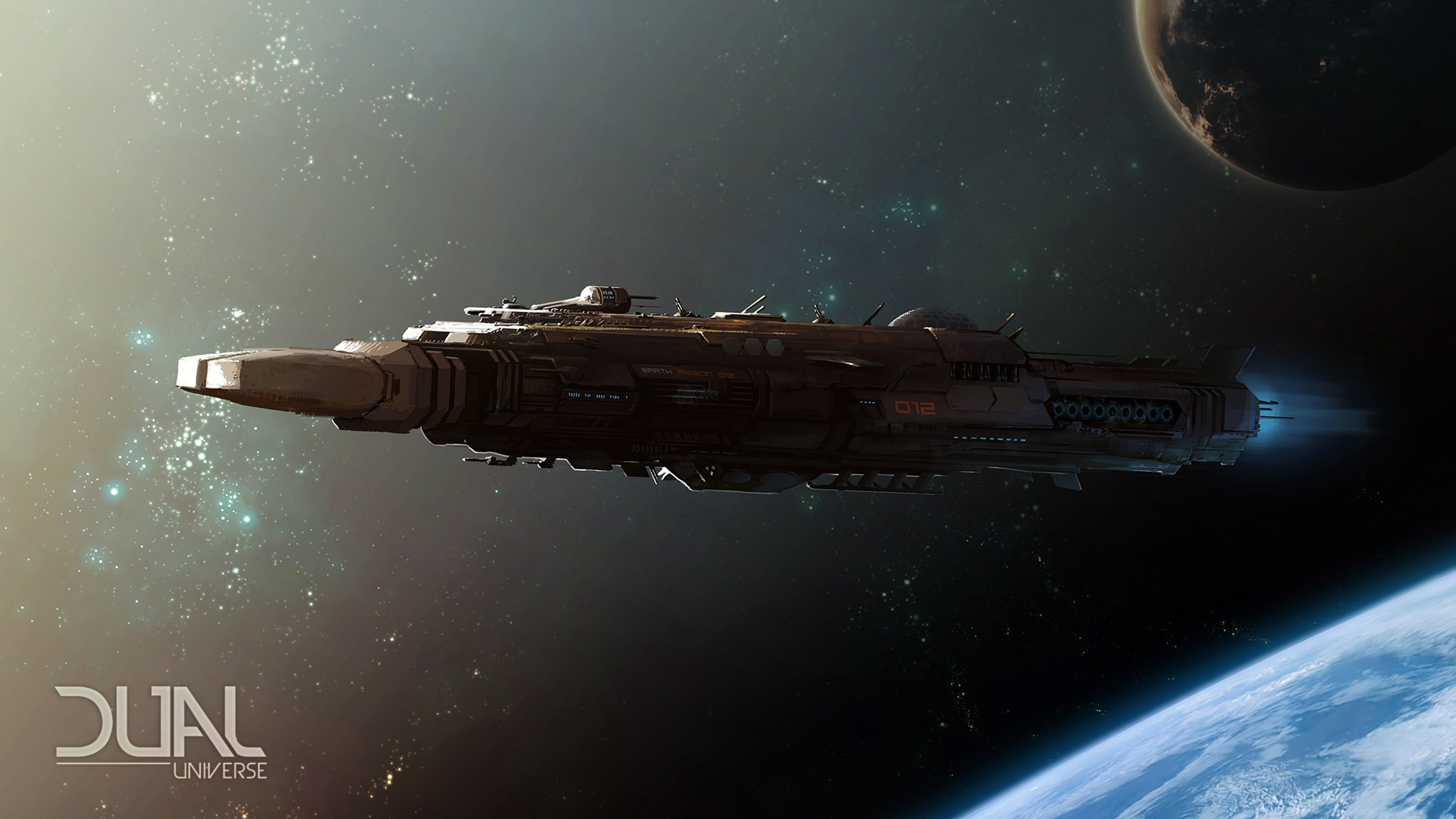 Fast forward a few hundred years, and the Arkships are completed, and the nominees have all been selected to be the new caretakers of human civilization in a galaxy far, far away. Or solar system. Or whatever.

Of course, the people who don’t get to go are rioting and throwing tantrums. Possibly angry about a neutron start about to kill all of them. Or something like that.

The pioneers (as they call them) are put in to a deep cryogenic sleep aboard the Arkships, and they take off in a near 10,000 year journey across space to their new home. Yes, 10,000 years. Once the arkships land on their new home in wherever, you, the pioneer, are set free to choose whatever life you want to.

The game expresses total creativity and freedom made available to the player all thanks in part to using the Unreal Engine 4 engine and the voxel-based system for building. Novaquark boast a procedural generated system to create countless worlds and solar systems, and each of them are ready for players to exploit however they see fit. Control planets, build anywhere and anything, and make sweet, sweet love with the local wild life. Ok, kidding about the last part, but you get the gist. 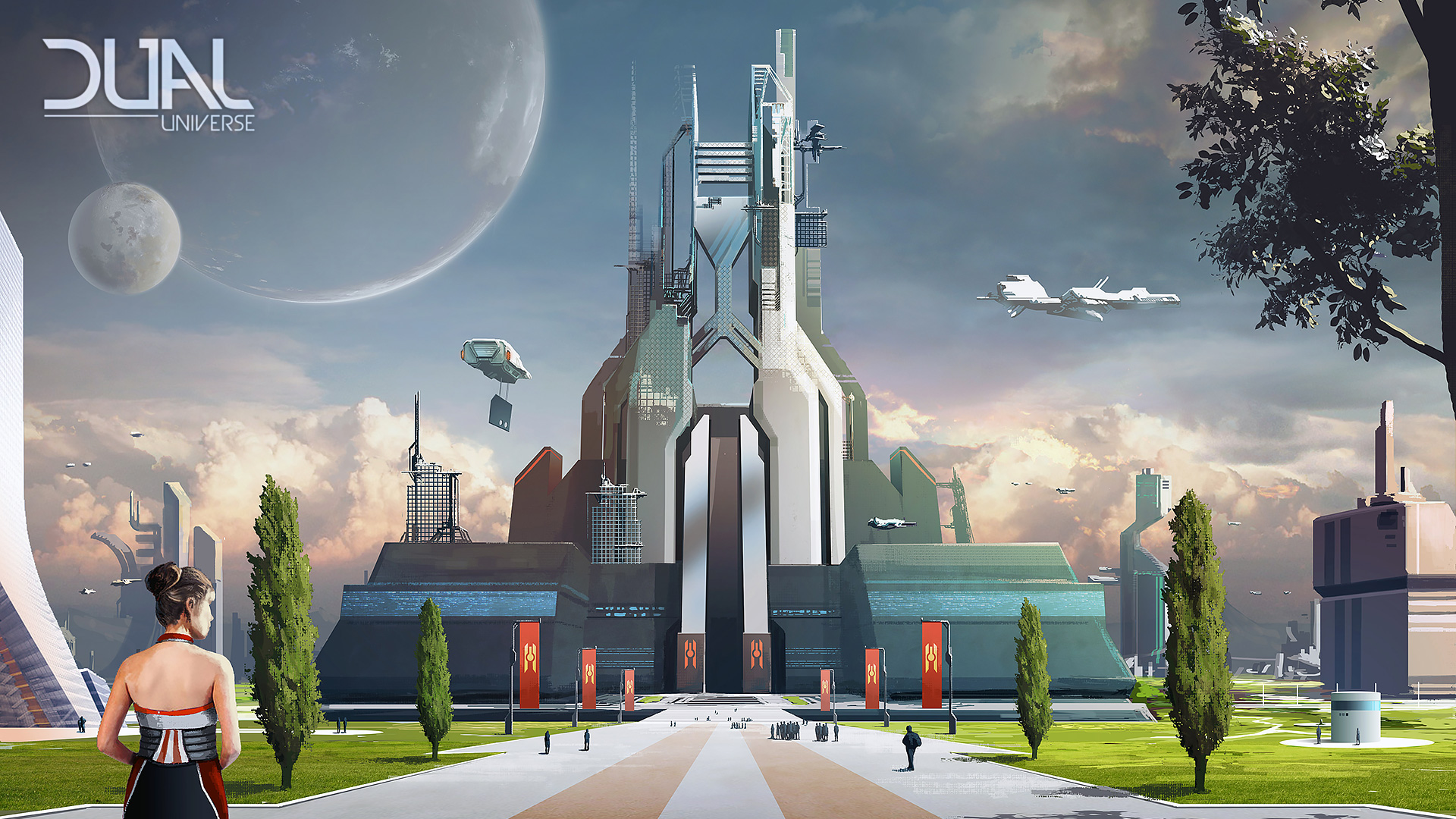 I would go in to more detail on the planetary building and what not, but right now there isn’t too much information on hand. At the end of the article, I’ll list some links to check out the specific devblogs to get a feel for the theme they are going for.

Now, on to the more interesting aspects of this ambitious project. Novaquark state that you will be able to design, and build any type of starship you want, to include making them multi-crewed. Yes, you and friends can design your own huge starship, then pilot it together and fly across the celestial seas doing whatever you want.

This will all of course be 100% seamless, and everything in the Dual Universe will be in one instance. Ok, I shouldn’t say instance since that describes the games goal poorly. They are aiming for a single shard server quite similar to Eve Online’s server. They also claim that the planetary side of the game and space side will be 100% integrated. Basically, no loading or instancing. Just all one big happy ball of awesomeness.

Overall, Dual Universe, in my opinion, seems to take the best aspects between the two games Eve Online and Shores of Hazeron. Which rustles my jimmies in a very pleasant way. I could go on and on about the many potential features that the developers from Novaquark intend to implement, but it would be much better for you to read in to all of them yourself. I just wanted to tease all of you. Oh, did I mention it will also support Oculus Rift?

Dual Universe sets out to shake up the industry with it’s innovation. Of course, that term can be argued, but I find it fitting. It’s current stage in development is pre-alpha, and they aim to release a working alpha by Q1 2016. Around the same time, they will kick off their crowd funding campaign to garner more interest and cash. I urge any of my readers to at least take a look in to this beast of a project, and give it some consideration at the least!

Drink up, and fly dangerously,