FIRST CONTACT If there is one responsibility in Eve that can be considered tedious, and often times unrecognized within Corporations or Alliances, is the role of a recruiter. You put […]

If there is one responsibility in Eve that can be considered tedious, and often times unrecognized within Corporations or Alliances, is the role of a recruiter. You put a nerd who probably has the social skills of a high school boy trying to ask his crush out to prom in a position to basically be your representative to the rest of Eve. Fortunately, we’re all this person. No? Just me? Ok…

I’ve been playing MMORPGs for a little over a decade now, and have experienced all sorts of roles and community building with clans/guilds/corporations or whatever you wish to call them. If there was one thing I learned about it all, it’s that whenever you are trying to build a gaming community – specifically within a game – it’s that you need people with social skills.

But Lego, everyone knows that, GTFO scrub.

Yes, you are right tiny, little spaceship voice in my head. Everyone knows they need that type of person, but the problem is you rarely see those types of people doing those roles. So before I go on any further, I’m making this post to explain the importance of human relations (HR) and how it intertwines with your recruiters within Eve Online. Brace yourselves, exciting things are about to happen!

You just got off work. Your kid punted the family Chihuahua out of the window on the second floor. Your wife is mad at you because hormones. You’re tired, and just want to have some fun for the rest of the night, so you log in to Eve for some pew pews.

It’s a quiet night in your Eve world, and your corporation isn’t doing much. As soon as you hop on teamspeak, and begin chatting away with your fellow nerds, your CEO screams that we need to recruit more people. Everyone is quiet, but because you’re already five beers deep tonight trying to relax, you chime up and say you’ll take the reins of being a recruiter for your Corporation.

Tomorrow rolls around, and you hop back in to Eve, and remember you volunteered to be a recruiter the night prior. “How hard can it be?” you ask yourself. You hit the forums, and begin spamming local chat in Jita. You make a recruitment thread, and peruse the boards for anyone in particular looking for a group to join.

You have all of these tools at your disposal to drag more people in to your corporation, and you think you’ve got this.

Everyone has these tools as well! You are competing with dozens, if not hundreds of other players in Eve looking to recruit as well. Days go by, and then weeks drag on, and if you’re lucky you’ve managed to pull in maybe a handful of players to your corporation. Most of the time however, especially with small, upstart corporations, you haven’t even been looked at yet.

GET TO THE POINT LEGO

I could go over the many tools you can use to recruit, and bore you to death on how to utilize them. Fortunately, even I don’t want to do that, so I’m going to tell you the biggest secret to being able to recruit anybody!

I know it’s such a nasty word for us nerds sometimes. However, it is the key to success within any corporation. You can send out eve mails all you want to prospective players, stalk them on the forums. Or my particular favorite method I’ve seen some recruiters do, is send out a mail, and add said person to their watch list. And then never follow up with them, or start a conversation.

I am serious here when I say that the most important part here is talking to them. Timing, good grammar, and being talkative are crucial when making “first contact”. You can send a hundred evemails to players looking for groups and then forget about it, hoping they’ll just contact you, but expect to be disappointed if you do this. I guarantee that one recruiter from that one corporation in that one asshole alliance is way ahead of you if he’s actively engaging the players, even if all he did was start the conversation and say, “Hi.”

So now that I’ve covered the essential skill needed to be a master of seduction in recruiting, you might still be wondering, “Well, that’s all great Lego, but how do I social?”

THE PICK UP LINE 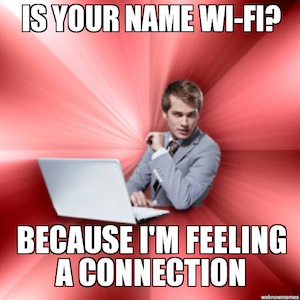 Alright, so you’ve scoped out your first victim, I mean prospect. He seems to fit most of the criteria you’re looking for based upon his thread in the recruitment board. You’re about to fire off an evemail and be satisfied that you did a lot of work today in Eve.

You remember reading this blog post, and remember that Lego told you to be social! So you freshen your breath up with a mint, and straighten your tie as you go in for the kill, looking about as dashingly handsome as a monkey in a suit. You’re about to make first contact.

First contact is crucial here. This is where not only you get to gauge said prospect to see if he’d be a good fit for your group, but where the prospect also gets to see if he thinks you’re a bunch of cool dudes or creeps.

This is where we refer to the first step in this heart pounding adventure known as the pickup line. In all seriousness, think of recruiting as scoping at girls to ask out on to a date. Just in this case, don’t try to sleep with them afterwards.

Don’t start a private conversation with your prospect and just say, “Hi.” It’s creepy as shit and makes you and your corporation already look unprofessional. Introduce yourself, who you’re are with, and say that you saw he/she was looking for a corporation, and if they were still searching. After I state all of that, I typically give them a chance to respond.

At this point, you broke the ice. They know who you are, and what your purpose is for talking to them. If they haven’t found a corporation yet, you’ll know. As soon as they respond, you’re already a shoe in with the prospect. They’ve already put you in their consideration box, and now all you have left to do is make your corporation sound like the greatest thing to ever happen since sliced bread.

GETTING TO SECOND BASE

The rest of the conversation should be pretty simple and straight forward. Go over the basic information of your corporation and alliance (If you are in an alliance). Link them your recruitment thread, public channel, and whatever else you can throw at their face to make you seem awesome. Just don’t go overboard.

The only real trick here is to not flood them with too much information. Just tell them enough to put them on the right path to learning more about your corporation, and frequently in between the conversation, ask them if they have any questions. This “interview” has to be done at their pace. Not yours.

Once the conversation has taken its course for the most part, if at all possible, invite them to join you on your corporation’s teamspeak for a voice interview. (If you have teamspeak, if not, well, god help your soul.) There isn’t much of any difference in the approach of talking with your prospect on teamspeak as it is in-game. Just be friendly, knowledgeable, and “funny”. Answer any more questions he/she might have, and then try and shoot the shit with them for a bit after a while.

If they get on teamspeak with you, it’s a done deal. Guarantee it.

And yes, this all sounds like telling someone about going on a first date. Because it is.

Congratulations, your prospect was so interested in your corporation, he decided to apply! Now you get to do it all over again with new people!

It gets easier and easier the longer you do this role, trust me. In fact, I enjoy it myself now. I genuinely love meeting new people in Eve, even if they decide not to join my corporation.

And believe me when I say, try not to feel underappreciated when recruiting. It is a tedious, and time consuming job that many will not understand if they’ve never committed to it like you and I have. Just remember, it’s all about getting new people to enjoy the game with, not about being the special star in your group.

See you in the verse’, and fly dangerously!

Like Loading...
Posted on June 23, 2015 0 By Ellegos Other Shite Posted in Other Shite Tagged #ellegos, internet spaceships, legos and friends, mmorpg